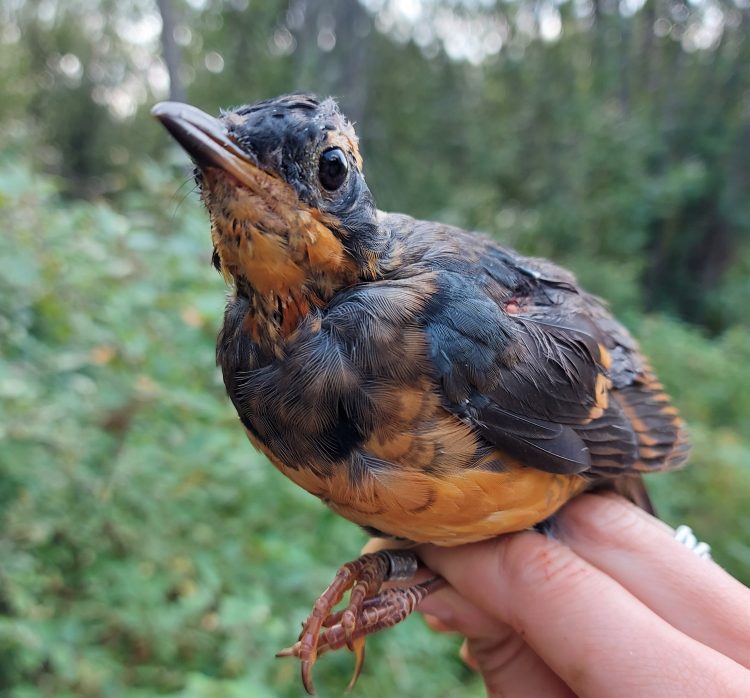 Above: Varied Thrush banded this week at the LSLBO. You can still see the juvenile feathers this bird would have grown on the nest in the bar across the chest, which is filling in with darker feathers. Where did this young fella come from?

Fall migration has been looking rather different at the LSLBO this week. Instead of the Tennessee Warblers that have been so numerous for so long, recently we have seen an increase in Swainson’s Thrushes – another one of our most banded species. They are one of several different thrush species that we band here at the LSLBO, including Hermit Thrushes and American Robins. We also banded our first Gray-cheeked Thrush of the season, and a young Varied Thrush! While we can expect to see at least a few of the other thrush species throughout the season, the Varied Thrush is an unusual capture. This young one is only the seventh to be banded in the twenty-seven years the LSLBO has been running, and the first since 2010. 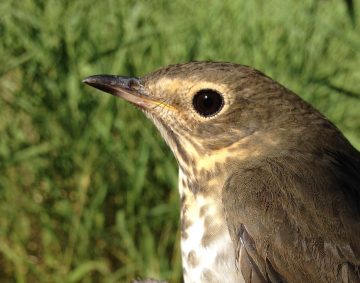 Above: The locally breeding Swainson’s Thrush has a buffy face, thick eye-ring, and shorter wings on average.

Currently, the Varied Thrush is listed as a common bird in steep decline. As of 2015, their population has declined by 73%. Since they prefer old growth forests and large trees, they are especially impacted by habitat loss due to logging and fragmentation. Like many birds that visit bird feeders, they are also vulnerable to window strikes and predation by both feral and domestic cats.

They are predominantly found in the Rockies and British Columbia, so seeing them this far east is a treat. If you are very lucky, you might be able to hear the single alternating note of their song on Marten Mountain during the breeding season: keep an eye out for a robin-sized bird perched on an exposed branch near the canopy, with striking slate-grey and orange plumage! 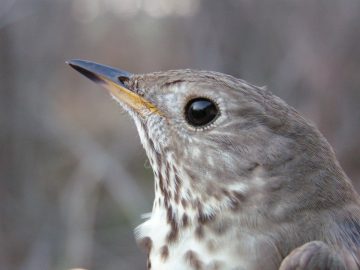 Above: The Gray-cheecked Thrush breeds further north, has a gray cheek, no eyering, and longer wings on average than the Swainson’s Thrush likely as a result of their longer distance migrations.

Like other thrush species, the Varied Thrush forages on the ground, using their long legs to sneak through the low bush looking for insects during the summer months. As it gets cooler, they switch to a nut and fruit diet that helps them pack on the fat they use as fuel during their migration from the northernmost edge of their range in Alaska to the milder B.C. coast. This is a considerably shorter migration compared to other thrush species.

Our popular Swainson’s Thrushes travel from their boreal breeding grounds all the way down to the western coast of South America, including Argentina and Peru. The Gray-cheeked Thrush we banded this past week may join the Swainson’s Thrushes in Argentina, but they also spread throughout the Caribbean and farther south into Brazil. Meanwhile American Robins will spend the winter anywhere between the southern edges of Canada and down towards Florida and Mexico.

September will be the last month for LSLBO’s songbird migration monitoring, and the first for our owl banding program. If you are looking for more information regarding bird conservation and what we do here, be sure to give the Boreal Centre for Bird Conservation a visit.