As fall migration gains momentum with a second wave of birds heading south, the LSLBO has had to keep most nets closed due to persistent and bold black bears on-site. To keep birds safe, we have kept 12 of our 14 nets closed, opening only our two aerial nets that are raised up into the canopy, out of reach of bears. Since so few nets have been opened, we have only banded 114 birds this week despite thousands moving overhead.

Most of these migrants have been warblers, specifically the Myrtle Warblers that seemed last week to be late to move. The Myrtle Warbler is one of the most ubiquitous warblers in North America and our most banded species at LSLBO. It is one of the first warblers to arrive in spring and the last to leave in fall due to a shorter migration distance compared to other warblers. Myrtles overwinter as far north as the central United States and only as far south as central America while other warblers travel thousands of kilometers further to South American countries like Peru and Brazil. Myrtle Warblers can overwinter in these higher latitudes because they can switch from eating insects in the summer to a berry-based diet in the winter. In particular, they are capable of digesting waxes from the wax myrtle plant (where the Myrtle Warbler draws its name) that produce their berries in the fall and winter.

Myrtle Warblers are one of two subspecies of the Yellow-rumped Warbler that breed in Canada, with their range being roughly divided by the Rocky Mountains. The Audubon’s subspecies breed west of the Rocky Mountains in British Columbia, while the Myrtle subspecies breeds in the Boreal forest from Alberta all the way to Newfoundland. Both subspecies of the aptly named Yellow-rumped Warbler, sometimes referred to by birders as “butter butts”, can be easily identified by the bright yellow patch of feathers on their rump. The easiest way to differentiate the two subspecies is by the color of their throat – Audubon’s have a yellow throat, while Myrtle Warblers have a white throat. 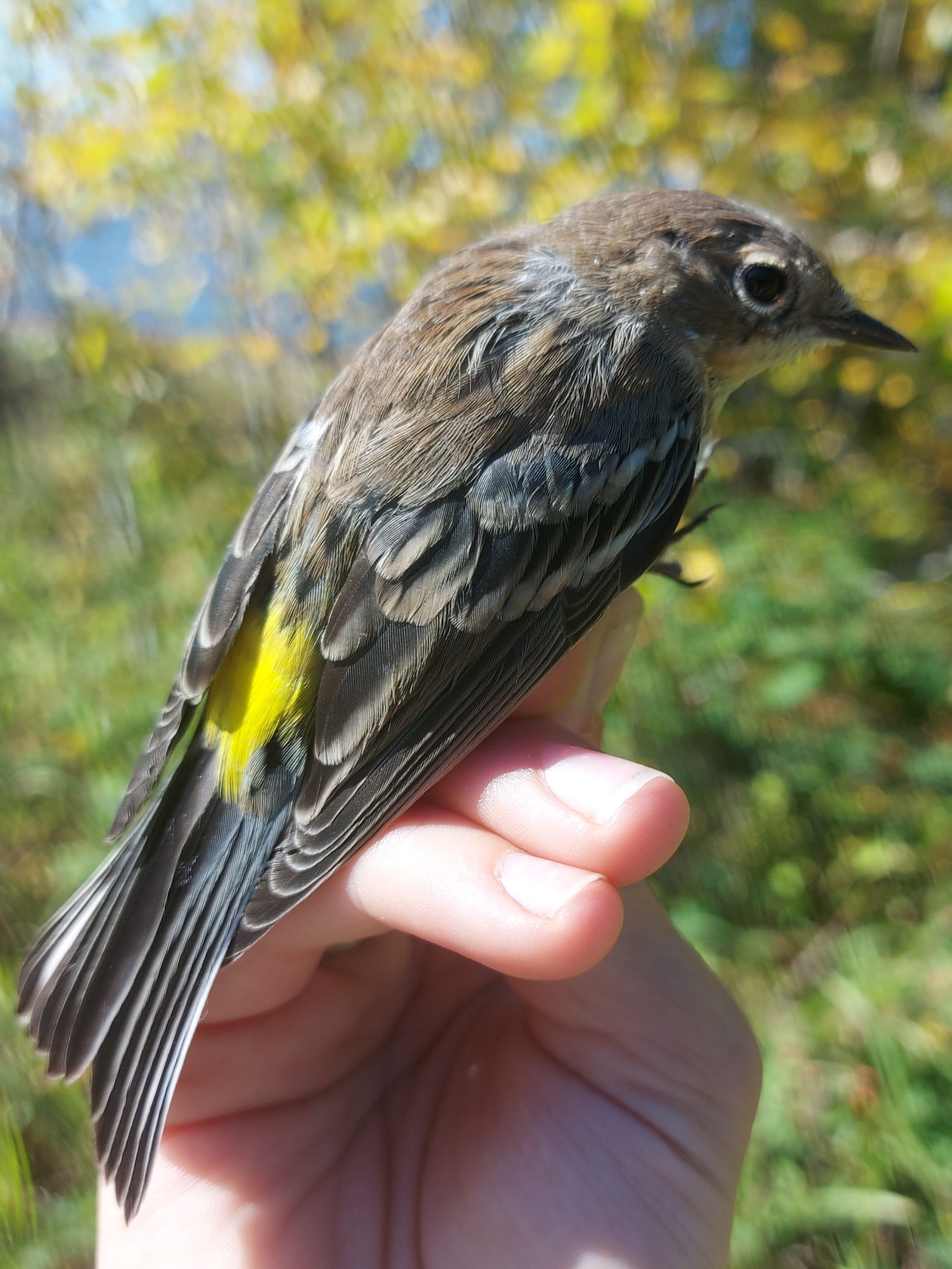 Above: Myrtle warbler, a subspecies of yellow-rumped warbler

Identifying migrating Myrtles flying overhead is much trickier though, especially in a mixed flock of warblers, sparrows, and other songbirds. One feature we use to identify Myrtle migrants are the white tails spots that are often visible in flight, even high up in the sky. Another identifying feature is to listen for their call. Bird calls can be difficult to differentiate between species, but as you train your ear, the Myrtle call is a quite distinct chip! And since Myrtle Warblers are rather vocal in flight, these calls can be a reliable feature for identification.

While we continue to monitor migration, we hope it will soon be safe to reopen all our nets to capture the next influx of songbirds. You can help us by staying bear-safe while enjoying campgrounds, day-use areas, and other park locations by properly storing and disposing of food, garbage, and other bear-attractants to keep our bears fearful of humans.