The Lesser Slave Lake Bird Observatory recently finished its final period of Monitoring Avian Productivity and Survivorship (MAPS), but our summary of this breeding-focused program will have to wait until next week. While most of the 629 birds banded this week were again American Redstarts and Yellow Warblers, our Fall Migration Monitoring program had three exciting captures! 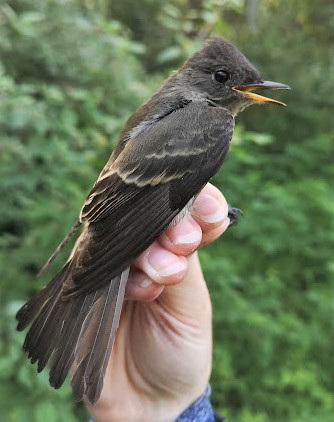 Above: Western Wood-pewee captured this week.

Two of these captures breed locally, but rarely find themselves in our nets. Our first uncommon capture was a Western Wood-pewee, only our eighteenth for fall monitoring since we began in 1994. These grayish flycatchers look very similar to Alder and Least Flycatchers, but can be distinguished by a mild peak in their crown and their light gray flanks and chest.

The second rare capture was our eighth fall LeConte’s Sparrow. In my experience, it is often easier to mistake LeConte’s Sparrows for mice than it is to mistake them for most other sparrow species. This is because of their small size and their proclivity for scurrying quickly near the ground in thick grass.

The week’s highlight was a Baltimore Oriole – only the sixth ever banded by the LSLBO, our second in the fall, and the first capture since 2006. Detections locally of this species seem to go in waves. In the early years of our monitoring, there was a relatively steady increase in detections peaking in 2003 with 18 seen before detections became rare again. In 2014, observations were again on the rise and with 24 seen so far in 2022 we may be close to another peak.

Baltimore Orioles are rare visitors to our station and tend not to breed locally. This is because the dense forest surrounding Slave Lake is not their preferred habitat of open areas with stands of tall deciduous trees nearby. In the right habitat, Baltimore Orioles can be visitors to feeders. Unlike grain-eating species that will readily consume bird seed, Orioles prefer ripe fruit or even a little bit of jelly. 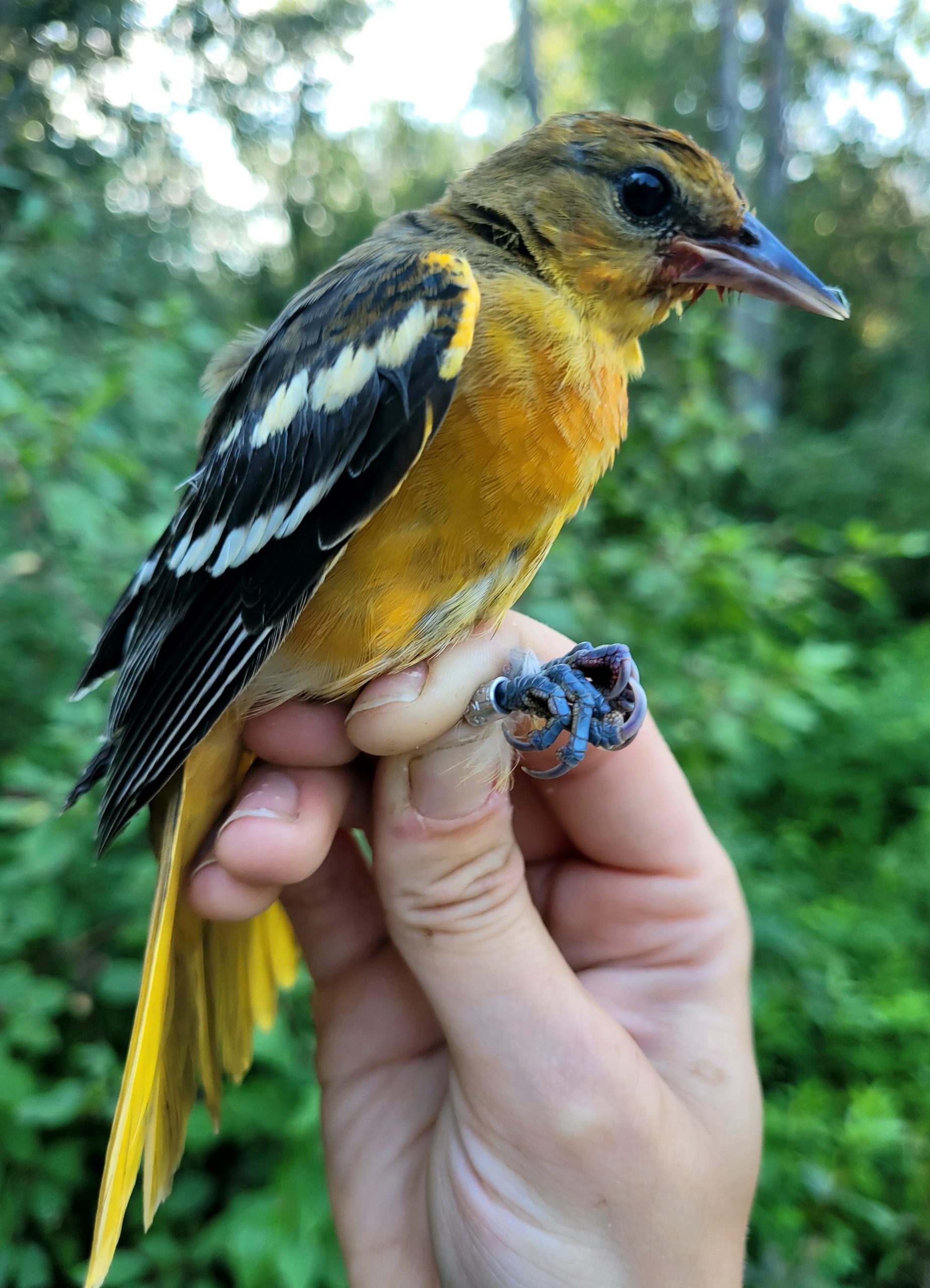 Above: Our first Baltimore Oriole banded since 2006.

Similar to American Redstarts that do not get their brilliant black and orange until their second fall, male Baltimore Orioles also remain somewhat drab with yellowish underparts and grayish backs (similar to the females) until after their first breeding season when the males will become bright orange with a black head and back. It may come as a surprise to many that these bright birds are actually a member of the blackbird family.

If you would like to experience our Fall program in person, tours run every Wednesday and Saturday through the month of August. Contact the Boreal Centre for Bird Conservation at (780) 849-8240 for more information.

The Lesser Slave Lake Bird Observatory Society will be holding our Annual General Meeting on Tuesday, Sept 6th at 10:00 am at the Boreal Centre for Bird Conservation. We are also seeking new board members to help support all of our wonderful avian monitoring and education programs that are provided by the LSLBO. To RSVP for the AGM or for more information on our board, you can contact Patti Campsall, LSLBO Executive Director at 780-849-8240. Or email info@lslbo.org. ... See MoreSee Less

You are invited to our upcoming Annual General Meeting at 10:00 am, Tuesday September 6th at the Boreal Centre for Bird Conservation.
View on Facebook
· Share

Check out our tours of the LSLBO on Wednesday and Saturday this week! Pre-registration is required.August is winding down and we only have a few weeks of summer programming left. Check out this weeks schedule!There will be Lesser Slave Lake Bird Observatory TOURS on Wednesday and Saturday morning. Please note that there are only a few spots left for the WILD AT ART program tomorrow afternoon, so contact us soon if you would like to join us. Unfortunately, our phone lines are still down, so leave a phone message (we check them often), email us at info@borealbirdcentre.ca or FB message us to register for any of the programs! ... See MoreSee Less
View on Facebook
· Share

Does this Canada Warbler look familiar? He has been recaptured at our LSLBO MAPS site every year since 2017! For more highlights from our 2022 Monitoring Avian Productivity and Survivorship (MAPS) program which wrapped up on August 1st, check out the latest weekly banding report. www.lslbo.org/weekly-banding-reports/august-4-10-2022/ ... See MoreSee Less
View on Facebook
· Share