For the second time this fall, the LSLBO has received word of one of our banded birds being recovered elsewhere. This time, a young Swainson’s Thrush captured on July 27 was reported in Humboldt, Saskatchewan on August 30. It was not easy for the finder to determine its species, however, because they recovered only a wing and the leg bearing the bird’s band. Instead of continuing its first migration to South America, this bird was killed and eaten by a domestic cat. 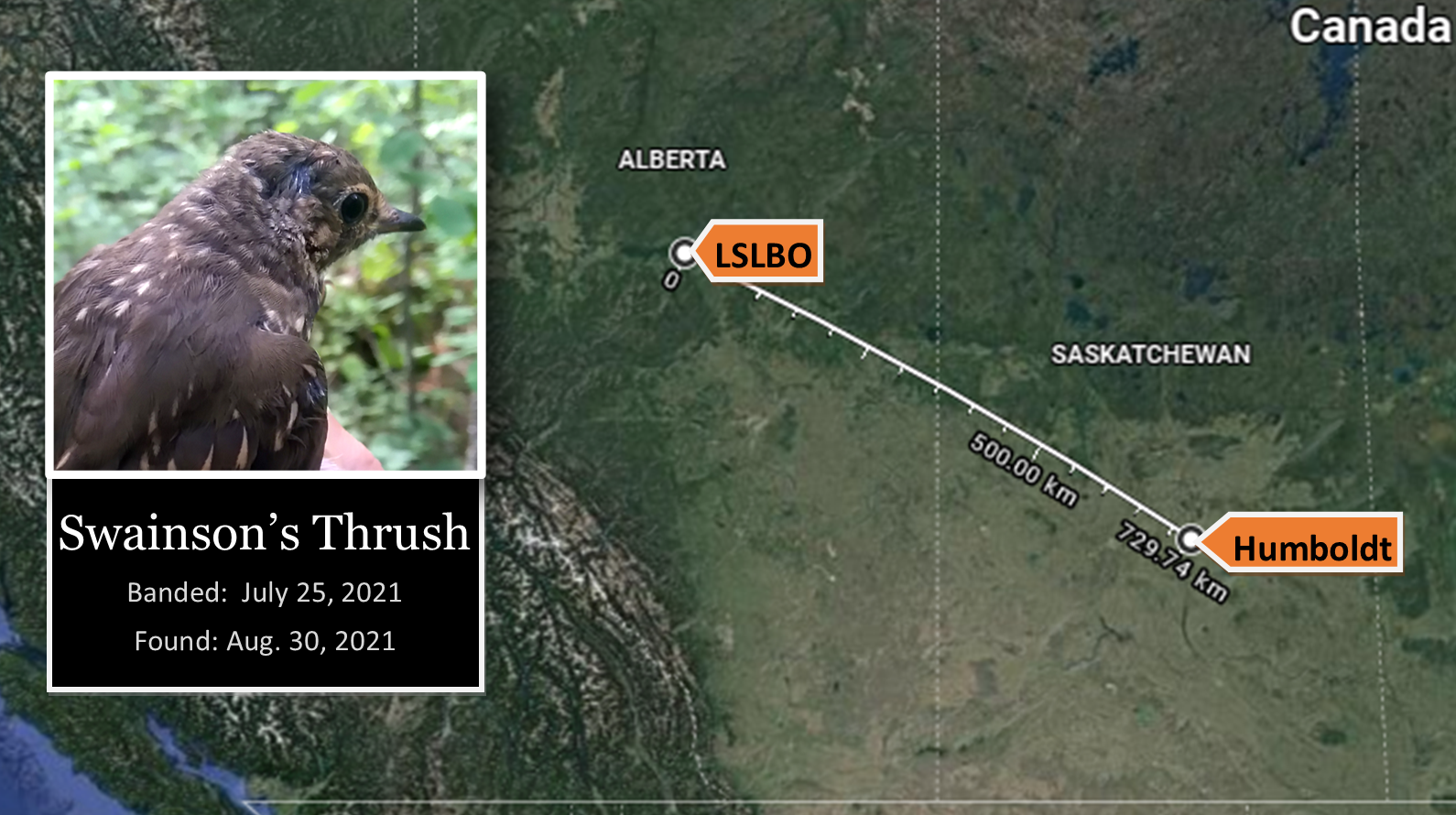 Above: Distance in a straight line that the poor, deceased Swainson’s Thrush would have had to travel before meeting its fate in the belly of a domestic cat.

Wild birds do not have easy lives and as our impact on their environment has increased, many of their populations have suffered rapid declines[i]. In many countries, the largest direct human-related source of bird mortality is domestic cats, whose depredations far exceed the deaths caused by collisions with windows or cars. Free-roaming cats kill between 100 and 350 million birds each year in Canada[ii], and those that survive must migrate through the United States, where a further 1.3 to 4.0 billion birds fall prey to cats annually[iii]. These numbers are derived from many careful scientific studies whose methods are geared towards generating a conservative estimate of bird mortality; the actual number of birds killed by cats is even larger[iv], and would include birds that are injured by cats and die later, and nestlings who starve to death after their parents are killed.

As awareness of the acute dangers posed by house cats to wild birds has grown, there has been a growing call for cat owners to keep their pets indoors[v]. But some people find it hard to believe that their cat could be a threat to wildlife[vi]. After all, house cats are not the only animals that prey on birds, so why should they be singled out? 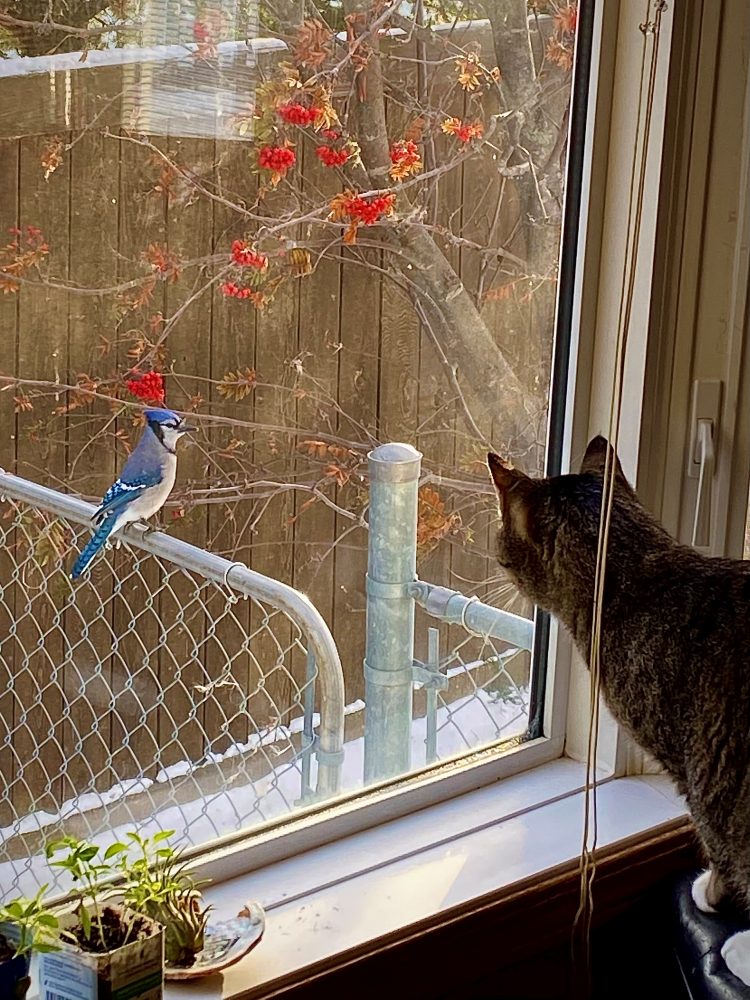 Above: Lance admires a Blue Jay. Cats and birds can coexist – but at a safe distance!

It is important to realize that, while hunting is in a cat’s nature, cats themselves are not natural predators for wild birds. House cats are an introduced species in North America, one that would not be present if we had not brought them here[vii]. Because we feed and care for them, they exist in numbers far higher than could ever be attained by native predators: and being fed and well cared-for does not stop a cat from hunting. A study that placed video cameras on pet cats found that they abandoned fully half of their prey where they had killed it rather than eating it[viii].

Loving birds and loving cats is not a contradiction[ix][x]. Many of the staff here at the LSLBO and the Boreal Centre for Bird Conservation share their lives with beloved pet cats, but none of us would ever let them roam outside unsupervised! Instead our cats enjoy the outdoors at the end of a leash, or from inside a protected outdoor enclosure[xi]. In this way, not only are birds and other animals kept safe from our pets, but our pets are kept safe from cars, dogs, wild animals, diseases, poisoning, and parasites[xii]. While keeping our cats indoors is not the ‘magic bullet’ that will save wild birds once and for all, it is still a simple step that we can all take towards improving the lives of the birds we love, and the cats who love us, too. 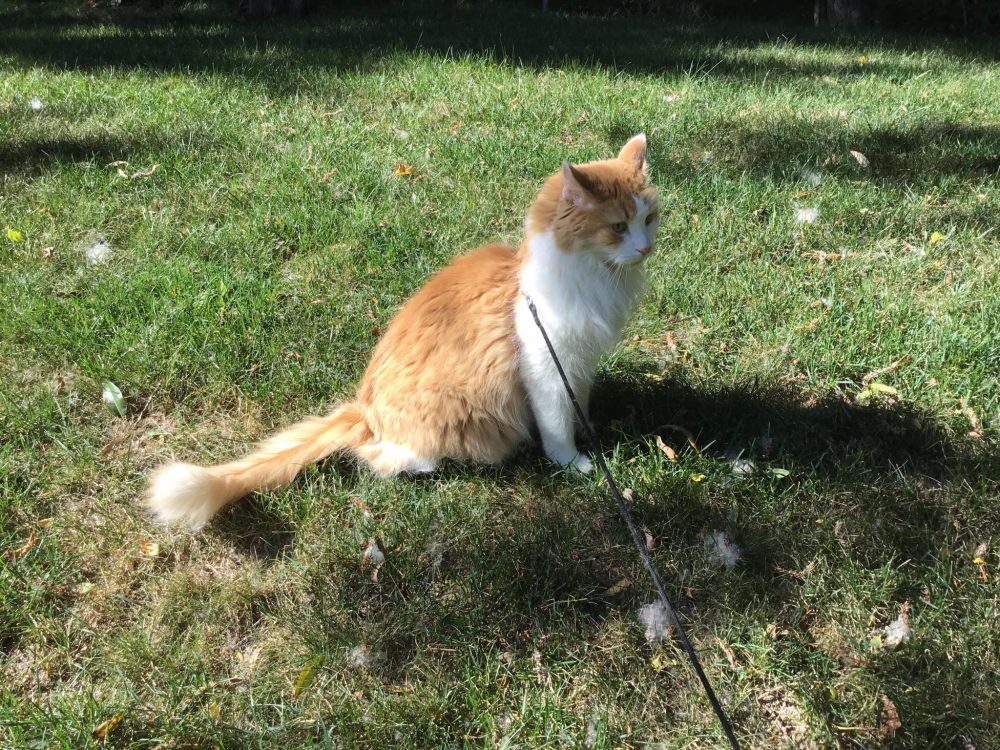 Above: As Manny demonstrates, harness training your cat is a way for you and them to enjoy the outdoors safely.

This past week has been a quiet one for the LSLBO. Warbler activity was considerably diminished. Black-capped Chickadees have been an exception to these generally slow mornings: this appears to be an ‘irruption’ year, when the year’s young move southward in search of winter territories, and groups of them are continually flying past the station. Our owl program banded our first Northern Saw-whet Owl.

[v]Dauphiné, N., & Cooper, R. 2009. Impacts of free-ranging domestic cats (Felis catus) on birds in the United States: a review of recent research with conservation and management recommendations. Proceedings of the Fourth International Partners in Flight Conference: Tundra to Tropics, 205-219.

Have you ever wondered what our LSLBO Bander in Charge does in the winter season? There is always a lot of program planning and paperwork, but sometimes Robyn gets to do some pretty cool things like helping to collect data for an owl research project. Awesome field day! ... See MoreSee Less
View on Facebook
· Share

BAND RECOVERY! A White-throated Sparrow was found on November 1 over 2700 km away in Arkansas. He was banded during our spring migration monitoring on May 18, 2022 and was recaptured in one of our MAPS sites on July 23 near the end of his breeding season. Unfortunately, he was found dead after being struck by a fire truck. This is only the second of 5,354 White-throated Sparrows we have banded to have been found by someone else. ... See MoreSee Less
View on Facebook
· Share

BAND RECOVERY! A White-throated Sparrow was found on November 1 over 2700 km away in Arkansas. He was banded during our spring migration monitoring on May 18, 2022 and was recaptured in one of our MAPS sites on July 23 near the end of his breeding season. Unfortunately, he was found dead after being struck by a fire truck. This is only the second of 5,354 White-throated Sparrows we have banded to have been found by someone else. ... See MoreSee Less
View on Facebook
· Share