With less than two weeks remaining, the end of songbird migration monitoring is fast approaching for the Lesser Slave Lake Bird Observatory. Although a few large foraging flocks produced two days of over 120 captures each, activity has begun to diminish as the second wave of Myrtle Warblers wanes. Only a few early migrants linger with ongoing sightings of Tennessee Warblers, Ovenbirds, and Red-eyed Vireos. Yet late-season migrants, such as Slate-coloured Junco, White-crowned Sparrow, and Greater White-fronted Geese seem to be slow to move in the warm weather.

As fall finishes so too will a third collaborative research project we are undertaking this year. While we have previously discussed the other two projects, namely insect surveys and parasitic flat fly sampling, we have yet to mention this study coordinated by Environment and Climate Change Canada. 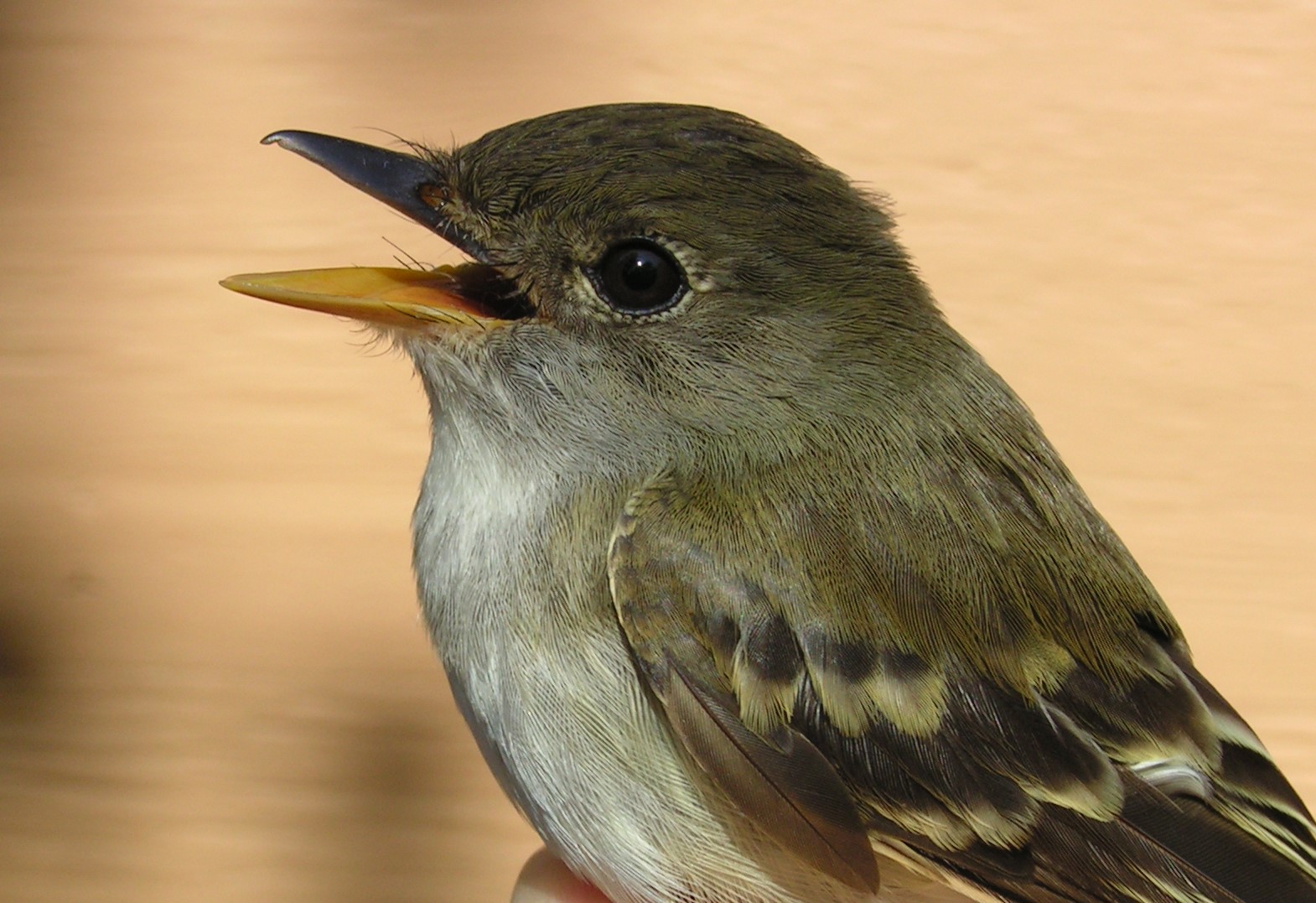 Above: This Least Flycatcher is showing off the wide bill and large mouth that is characteristic of flycatching species.

One part of this project focuses on aerial insectivore species. These species specialize in capturing insects while in flight and can often be characterized by their large, wide bills. Sadly, this group has declined by about 59% in Canada since the 1970s – the most severe decline detected in any group of Canadian birds with declines steeper in more northern populations. These declines are likely due to a multitude of factors on both breeding and wintering grounds, but key players are likely to be climate change, decreased insect prey abundance, habitat loss, and pollution.

Let’s focus on our local breeding grounds where observed geographic patterns of aerial insectivore population declines correlate with increasing concentrations of atmospheric pollutants from industries  in southern Ontario and north-central United States. These pollutants enter the atmosphere, then air currents bring them to the north-eastern ranges of Canada which most would assume to be wilderness untouched by humanity’s influences. 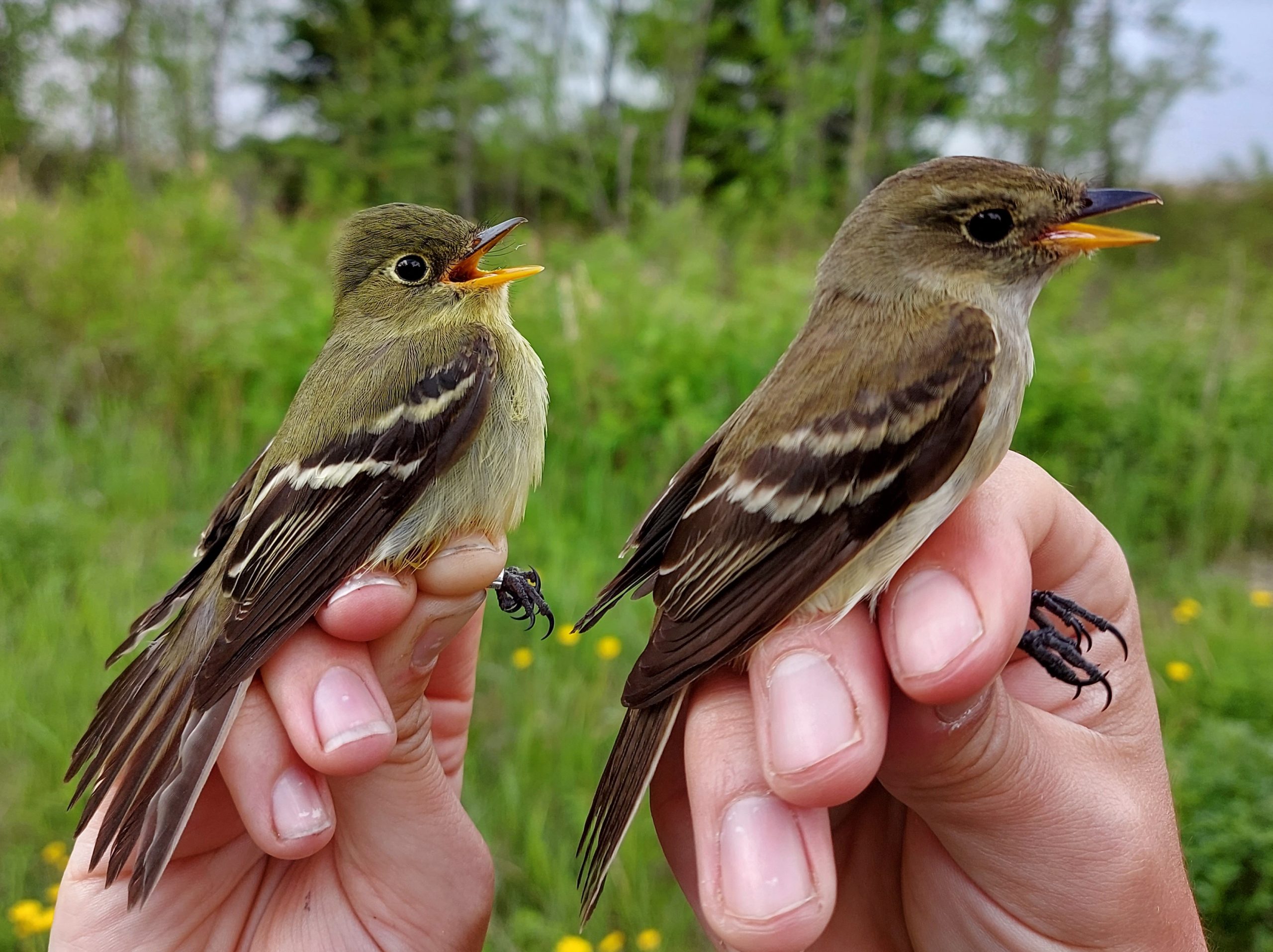 Above: The Yellow-bellied Flycatcher (left) and Alder Flycatcher (right) are also target species for feather sampling.

One of these pollutants can cause acid rain which affects soil and water systems and removes calcium sources from aquatic food webs. This can harm insect populations and aerial insectivores by extensions since they are so dependent on insect prey. Many of these pollutants persist in the environment for a long time so positive results of increased regulations on air pollution may take time to be reflected in ecosystems.

To better understand the range of these declines, we (and other Canadian bird observatories) have been collecting two tail feathers from several flycatcher species. The feathers are plucked from a small sample of captured birds for a number of analyses including assessing heavy metal concentrations to better understand pollutants, isotope analysis to reveal migratory connectivity, and genetic variation of Canada-wide populations.

Plucking does not impair the bird’s flight and regrowth of these feathers begins almost immediately.  If we were to cut the feathers, the feather would not regrow until the bird would have naturally moulted it. As well, we could not collect the small blood sample that is present at the tip of a plucked feather. Our contribution is one small part of a much larger project that is certain to help Canadians make evidence-based conservation strategies for these struggling aerial insectivores.